Dylan happily got into the queue, absolutely beaming at the prospect of being next. Despite his difficulties with queuing and waiting, he knows this bit, the bit where you step forward and begin your purchase! He already had his order set up on his iPad.

‘Can I have chips chicken nuggets corn Pepsi please?’

The fast food restaurant is busy for a Wednesday evening, there was a queue of 3-4 people ahead of us when we arrived but they quickly got served and seated, I wonder why there are only three people running the shop and the drive thru, a gentleman with the name badge ‘Liam’ seems to be handling the service well but it’s a full on job and he’s rushing from one end of the counter to the other fetching, carrying and serving.

I check that Dylan’s iPad message has not been accidently erased during the skipping and flapping of excitement. It saves time having it set up ready and keeps Dylan focused on the task in hand. It’s still there. Dylan’s not familiar with the KFC menu and I’m not sure if they do chicken ‘nuggets’ and don’t call it by another name. Still when I asked ‘what would you like to eat?’ this is what he answered. I don’t interfere.

Dylan goes skipping forward to the counter, shows Liam his iPad and presses the button. The iPad booms out his request and you can see the server is a bit taken aback and has not listened properly but he has noted that it’s the iPad talking and not Dylan. Liam glances closer at the iPad.

‘Oh, okay, no problem… is that popcorn chicken?’

Dylan skips and flaps at hearing his favourite item relayed back to him.

‘Yah bee, doah, doah, doah,’ repeating his approximation for ‘cola’ over and over again so as the server doesn’t forget that too.

Liam looks blankly at him.

‘So is popcorn chicken okay?’

No answer – as far as Dylan is concerned we’ve already established the food – what’s next?

Liam is starting to look rattled and panicked. Beads of sweat forming on his creased brow; he answers his own question,

Liam punches the item into his till and then fell foul to the next cardinal sin of pre-programmed fast food workers….

‘Is that large or small?

Now by this point I am usually intercepting; I mean Jeez! The lad has told you what he wants and we have all witnessed enough of an interaction for the whole chicken shop to realise that communication is difficult yet you need to continue undeviated from YOUR companies rote of unnecessary questioning??

At the point I would usually step forward and rescue Dylan from the perceived awkwardness of the situation and relieve the worker of the embarrassment of not even being able to serve food indiscriminately.

Actually the only person in this interaction that matters is Dylan, and do you know what, looking over at him, he was looking directly at Liam, he was interacting, he wasn’t stressed, he was happy he was being understood, he was working it! Dylan was okay.

So I left him to it. I stood back, pretended to be the next faceless stranger in the queue and pledged that I wouldn’t get involved until Dylan turned to look for me or gave me the nod to come over and help. So I didn’t.

So Liam is really blank now, there’s another family of five walking in through the door to join the queue of three groups of people that have already built up behind me.

Then like a lightning bolt Liam got his shit together, a flash of inspiration came across his face.

‘Wait there’ Liam says (like Dylan would be going ANYWHERE until he got his food??!)

and he dashed over to the kitchen and came back with two containers for popcorn chicken – one large and one small.

Liam got it. Just like that. Dylan was as pleased as punch.

The rest of the interaction went smoothly. Although Liam insisted on showing Dylan his order on the till screen to check it instead of reading it out. (why do people seem to think Dylan can’t hear?) Otherwise it went really well. Dylan got his food order paid and sat down.

I approached Liam for my order.

‘Just coke please. And you know, you did really well there. Most people don’t even realise the order comes from the iPad’.

Liam nervously laughs. Obviously just realising Dylan’s with me and I saw the whole interaction.

‘It’s a good computer he has there. He did well with it.’

I nod and smile in agreement.

Yes Liam, he did. 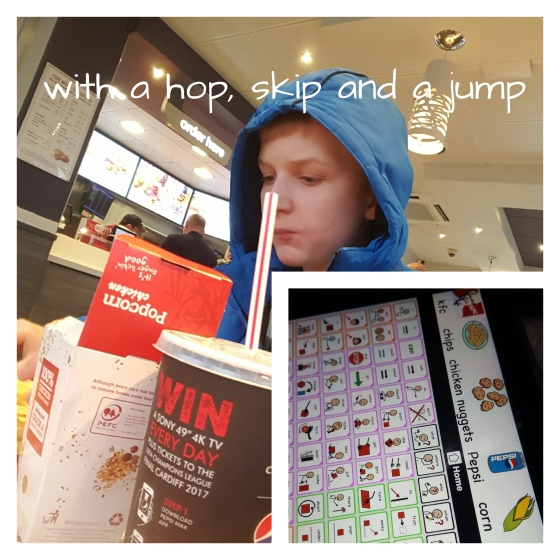