Planning is a large tool for reducing Dylan’s anxiety.

Bearing in mind every day for Dylan is filled with different lights, sounds and experiences the planning of the day gives him structure to help him feel grounded and in control.

It is impossible to plan for everything but if we can give Dylan an insight into what the day holds it can help him prepare for activities, particularly those which require extra demands on him such as shopping or big events that he may not be used to.

Dylan has a day board where he knows to move the Velcro picture across each day to indicate which day it is. Dylan controls the movement of this picture and completes it perfectly every day. This feeds into a larger more developed schedule which is broken down into times (which we have taught as a separate ABA programme) and sections of day from morning through to afternoon and evening (which has also been taught as an ABA programme)

The coming together of previous teachings is a beautiful blend of ABA learning; fundamentally teaching the individual components or skills so that they can be chained together to make a functional process or activity.

The adult controlled board uses laminated pictures to show various activities that Dylan has planned for the day. We use laminated pictures as Dylan is a visual learner and it makes taking in the information much easier if it’s in picture form rather than just words. We laminate them so that they last longer; Dylan can be rough with his adult led suggestions and they will get ripped quickly if not laminated!

If for example the plan is to go food shopping on Monday morning, this will be placed on his board then night before.

However should there be an unexpected change to the plans; the car has a flat tyre or there unexpected illness and we can’t go shopping as planned, the laminated picture remains on the board but is covered with a transparent ‘X’ to show that the activity is cancelled.

Dylan has some activities which really excite him. If he knows we are eating out that day or have an activity planned that he enjoys – which usually involves spending money- he will ask for money constantly.

To avoid Dylan becoming too anxious and repeating like this we often use a ‘now and next’ board.

A ‘now and next’ board uses two pictures of activities, the first is ‘now’ i.e., the washing, cooking, hoovering or whatever boring job it is that we have to complete before the fun stuff, once all the boring jobs have been completed we then move on to ‘next’ – the crisps, the coke, the shopping etc.

It’s a physical demonstration that we have to do these undesirable things first and then we will do your favourite thing.

It’s not a bribing tool, but an information giving one to show Dylan that we haven’t forgotten what you want and your requests will be granted shortly.

It’s an extension of our ability as socially polite people to be able to wait.

When we took Dylan out of school ‘wait’ was one of our first programmes that we worked on.

Dylan couldn’t wait, if he saw something he needed or wanted, he took it or did it. He was so impulsive, not naughty – Dylan’s perception was just ‘Why wait? It’s there, I want it, and I’ll take it.’

We started the wait programme with a target of 3 seconds.

Dylan would have to sit in front of us with a small M&M in on the table and he was asked to wait until he was told that he could have it.

Three seconds was the start and every time he tried to take it before being given the go ahead we would have to remove the sweet and start again.

Learning to wait was so hard and took a long time for Dylan to learn so the ‘now/next’ board is a good everyday extension of this which has a functional use to help Dylan manage his day.

The schedules and planning boards are skills that are heavily adult led at present but we hope over time and with more practice that these will be transferable skills that Dylan can develop to increase his independence.

Using such schedules can help planning for social activities, employment and learning as well as reducing the anxiety that an unplanned day can create for him. 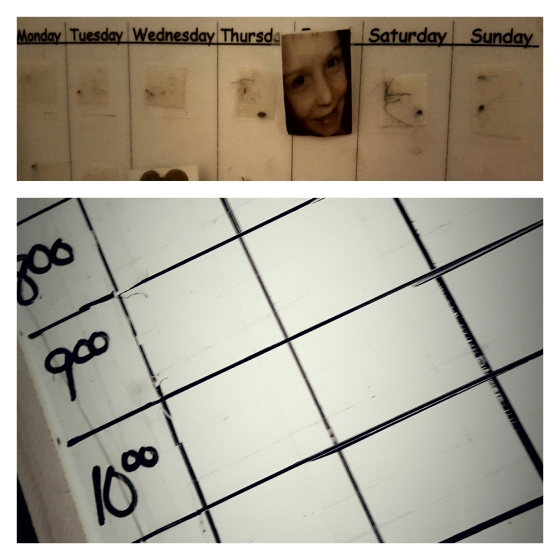