‘New research shows that autistic people die on average 16 years earlier than the general population and the gap in mortality increases if they also have learning disabilities’ RCGP 2016.

As a nurse influencing health is my life passion and no more so than health promotion.  From my  experience to influence lifestyle changes and improve the health of a neurotypical person is near on impossible. Add to that sensory difficulties, cognitive impairment, low financial income and lack of empathy from professionals and the statement above becomes a worrying reality for those with autism.

As parents we are lucky.

Dylan is a wholly fit and well child. We only speak to our doctor when we need an official letter written or a form signing.  We had a housing transfer form completed last year which detailed all GP consultations for Dylan since birth. There were 4 in total.

As happy as we are that he requires so little medical input it has concerned us just how he would cope if he needed invasive or thorough investigation should he become unwell.

To target this I bring my medical kit indoors once a week and check all the kids’ blood pressures, oxygen levels and have a listen to their chests with a stethoscope. If Dylan sees others completing tasks he is usually more relaxed with following their lead and Josh and Grace are thankfully happy to model this, while assisting and reassuring Dylan.

This is not normal for a healthy boy nor is it sustainable.

Dylan finds the examination worrying and he jitters and shakes, visibly uncomfortable with what is happening and nervous about what may follow.  I try my best to reassure him but the fear is too much, he only truly relaxes once the medical supplies are packed away and the bag is back in the boot of the car.

To compare this I have sneaked in when he has been asleep and popped my oxygen machine on his finger. He has a resting pulse of 77 with 98% oxygen; much better levels but just goes to show the effects that being examined has on him.

How much harder is it going to be for him when feeling unwell, being in a hospital surrounded by strange machines, strange people, the unknown?

Situations such as waiting in dentist’s waiting rooms or GP receptions increase Dylan’s anxiety and the feeling of uncertainty about being examined or requested to do things that he doesn’t understand. Dylan will tolerate opening his mouth for a dental check but will not sit in the dentist’s chair.

The process from entering the waiting room causes him to shake and whine and he develops a stress rash which rises up from his chest to his face.

By the time he is in the consultation room he will sit on a stool in the corner, never in the dentist chair, even after years of practicing.

Our dentist is amazing, very patient and reassuring to Dylan but he is still terrified. Dylan will open his mouth but you can see it is taking every shred of his strength to resist clamming his mouth shut and running away.

He is so brave.

Routine monitoring of eye tests and hearing tests are currently impossible with the level of intrusion and specific instructions to be followed being lost on Dylan. Don’t get me wrong, these are all procedures that can eventually be taught but would require a sympathetic optician to allow adequate practice of the examination to desensitise Dylan to the anxiety of the process.

Luckily Dylan dietary health is currently good – Dylan loves his food and his dietary choices constantly need overseeing; the kid loves carbs, salt and sugar and would be heading for an obesity crisis without intervention and support. Education on healthy eating is tricky when sensory seeking taste buds crave curry, spice and salt and we can envisage it only getting harder as Dylan matures and develop more independence over his choices.

Although we can’t directly change the horrifying statistics that report that Dylan could die prematurely if we can desensitise him to physical examination and teach him how to look after and preserve the health that he does currently have, it could at least give him half a chance of a longer, healthier life. ❤ 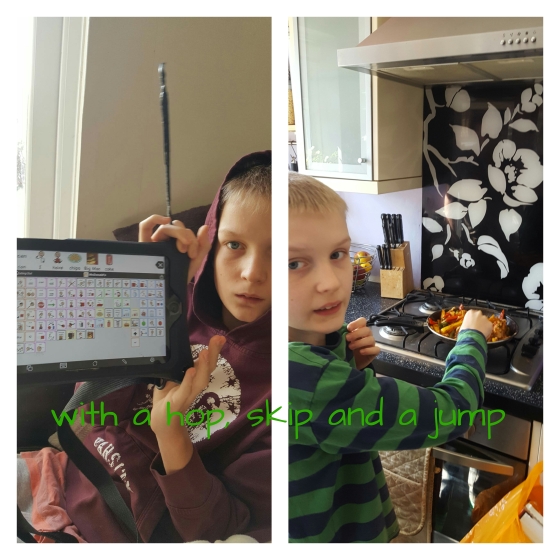