A day spent at Woburn Safari park. Plenty of opportunities for modelling, observing and commenting. We spent the day in the car which was frustrating at times for Dylan. It’s not always appropriate to model during these times but the closed environment meant that Dylan could focus on the iPad without the sensory overload of the crowd, attractions and other distractions which can be such a barrier to Dylan’s ability to communicate. 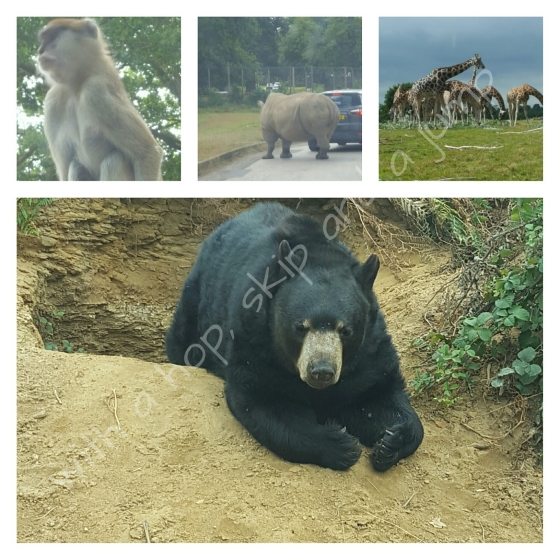 We went around the park twice in the car before getting out to stretch our legs. As suspected Dylan found the bustle hard and needed his ear defenders on for that added bit of security against the overwhelming noise and excitement from those around him.

Dylan is 13; he doesn’t look like an unruly toddler. We have now approached the age and height that makes it clear that Dylan is different. People move out of his way and apologise that way you would if you got in the way of a wheelchair user. That’s fine, I think it means that I can focus on what Dylan needs and how he’s doing instead of worrying about the opinions of those around us as I have done previously. Lets face it – no one has given us disapproving looks for many years, the looks are more of sympathy or people simply don’t look – like they don’t make eye contact at all.
Maybe its me; maybe I’ve stopped giving a s**t. 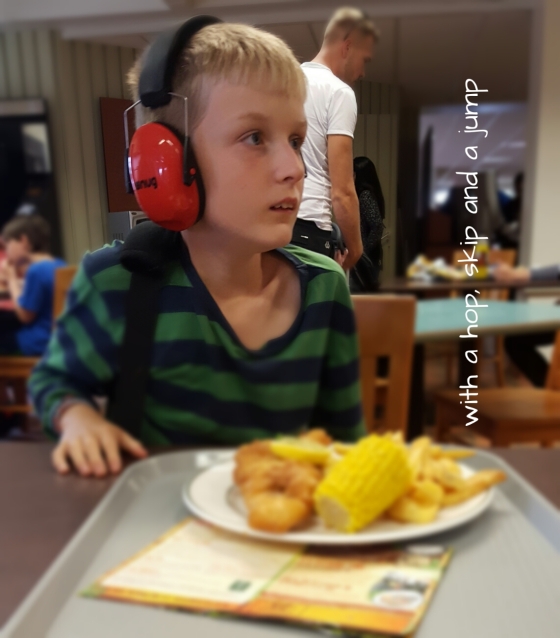 Anyhow, as we were at the park and after being sat in the car for a while Dylan *obviously* wanted an ice cream. I went with him to the list of ice creams at the stall so he could see what was available and then ensured that the ice cream of choice was programmed into his iPad ready for him. We queued patiently together until it was our turn and Dylan approached the kiosk and with minimal prompting used his iPad to ask for 3 ice creams.

It was busy and there was a queue forming behind us but the two lovely girls at the stall interacted directly with Dylan, looked at him, waited patiently for him to get his money out to pay and addressed his slow but accurate ‘thank you’ as he put his change back into his wallet. It was beautiful to watch as Dylan strode purposefully away from the kiosk with ice lollies for himself, Josh and Grace.

Tomorrow is day 21 and I’m going to miss this. I’m sure that the pattern of modelling is now engrained in the way we work with Dylan and the iPad but I’m going to miss the recording of it. Looking over the last 3 weeks Dylan has had so many positive interactions and developments which would have been lost in the day to day bustle had I not recorded them on a daily basis.

A sunny day today so we took advantage of it and had a mammoth 3 hour trip to the park.

Kids were out everywhere making the most of the August sunshine.

Dylan generated a lot of attention with his IPad. Some people seemed genuinely aghast that Dylan uses it to speak.

Josh saw some kids that he went to school with previously before moving schools a couple of years ago. They remembered Dylan from the playground at school pick up time even though Josh was at school with them probably over 3 years ago.

They were so happy that Dylan was finally able to communicate and asked him loads of questions. Dylan began to get flustered at all the attention and Josh recognising this quickly redirected them to an inclusive game of football.

Dylans much happier interacting with people from afar and knows whats expected from him when a ball is kicked in his direction. 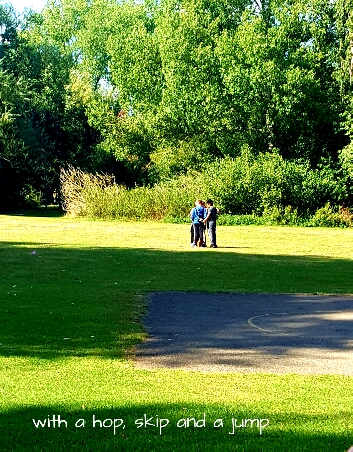 We stayed at the park for hours before heading over to the shops for bits for tomorrow lunch. Dylan used the Ipad to talk about where we were going and was really pleased to be heading out for food,  even if it’s not going to be eaten till tomorrow!

Football’s great but it doesn’t have a patch on food!
New words- 16

I love my weekends.  I’m a firm believer in the 2 day week and 5 day weekend.

Unless I become Prime Minister or win the Lottery its a five day week of work for me for the foreseeable future so my mini weekends are precious.

We are lucky as a family that Dad and I both have flexible and understanding employers which allows us a small amount of time at the weekends to spend together with the children.

Today it was Dylans choice of activity and although he was out of the room while the possible plans for the day were being discussed he soon piped up with the IPad that he wanted to go the the local village pub for lunch. Unprompted; Wow! 🙂

Dylan doesn’t have limited food obsessions. He largely just loves food. He has a spicy, salt seeking palate at home but when we eat out he often uses the Ipad to request chicken and chips or burger and chips- simple items which are usually available from the kiddie menu.

Today we used the IPad to model requesting different foods. We modelled to Dylan the different items on the menu and he was quite taken with the idea of chicken skewers and concentrated to correctly spell them out on the IPad.

He loved them! A proper adult sized meal from the big boy menu and he ate the lot!

Its really nice to see how he’s starting to realise that there are words all around him that he can tap into successfully.

No food pictures I’m afraid, we were too busy eating!

Here are some snapshots from the Ipad instead. 🙂 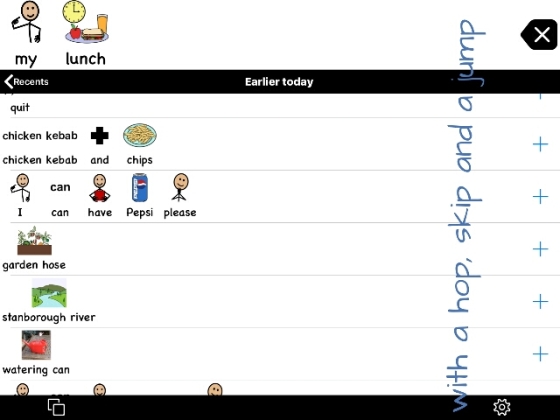 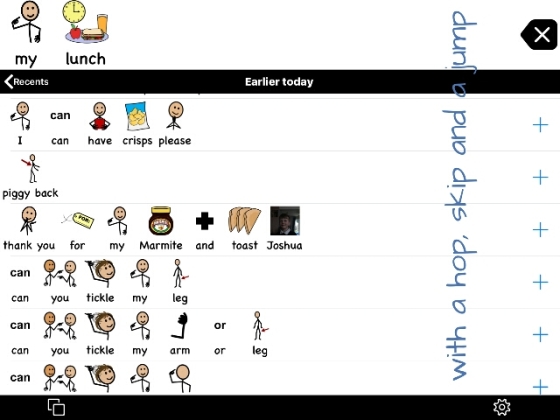 Finishing breakfast and then some sensory seeking 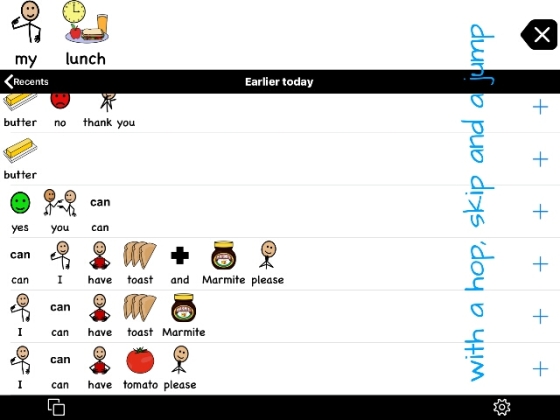 Requesting breakfast. No butter thanks. 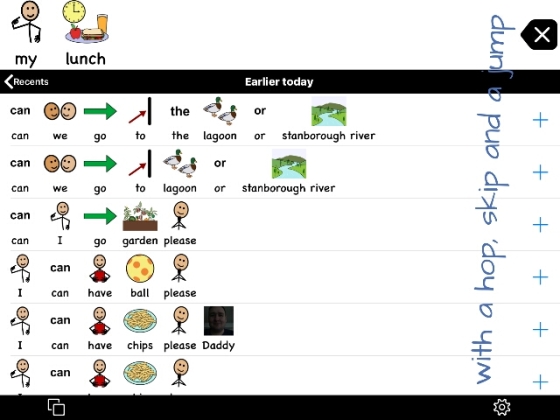 Clear plans for the after lunch activity. 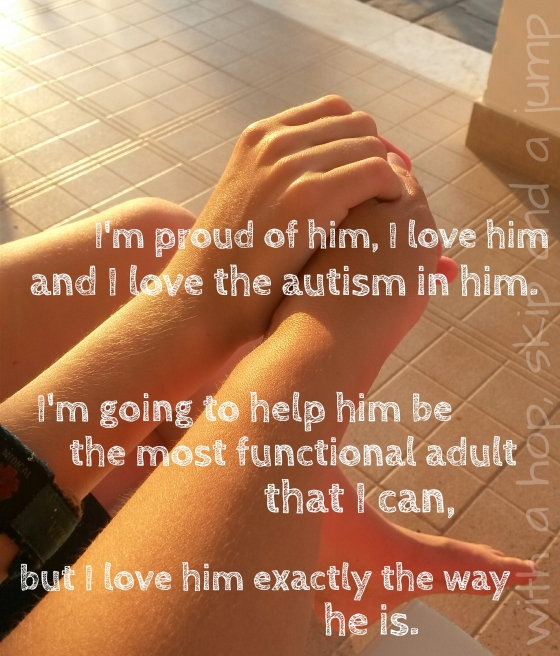 Lots of independent Ipad use today.

Lots of requests which seem to come naturally.

Encouragement brought some statements, ‘I see…’ was used a lot at the lakes with reference to the ducks and other wildlife.

Requests included to go to places and  Dylan chose which shop to visit.

He picked a couple of items to buy himself for a treat for the weekend and also utilised ‘all done’ to signify that the shopping was done and it was time to pay. 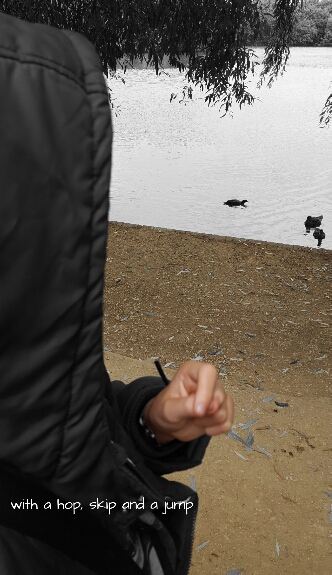 Another day of double shifts so not much time at home for me. I’m told it’s been a good day. The Ipad has been used throughout the day and looking at the history this evening it look like the modelling is going well. 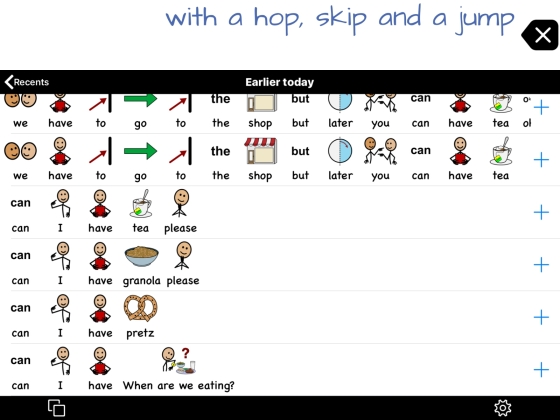 A lot of the posts on my Facebook this evening is discussing and preparing for back to school.
New classes. New teaching assistants. New IEPs.

I feel very grateful that we are in a position where this isn’t an issue for Dylan and my double shift doesn’t feel so tiresome when I know its facilitating him to be able to achieve so much.

Approaching the new academic year where Dylan would be in Year 9 and a year where his peers have to contend with choices for exams, work experience and the rush towards independence. We are actually focusing on more concrete concepts like cooking, shopping and laundry.

This is fine. Dylan is happy and progressing. Thats the main thing.

Although different, this next year also holds excitement for us; New possibilities, learning opportunities and with the strengthened use of the Ipad -and everyone now on board with the modelling – who knows where we will be progress-wise this time next year.

FACT. There is nothing more likely to push the irritation button than shoe shopping.

This nightmare scenario of having feet measured, shoes sought and then to queue and pay for said shoes is slightly relieved by the fact that

As forward thinking parents we thought we would seal the shoe shop deal with an icecream to start. Having just eaten dinner, an icecream was a welcome desert so we headed straight to the icecream section in our local cinema.

One of Dylans great conundrums.

Now when given the choices Dylan verbally chose lolly. He went and stood next to the lollys,  his face crumples and he quietly begins to cry. As I walk over to him he gets his Ipad out of his bag. He types

‘Dylan,  do you want the icecream instead?’

Dylan knew he had a choice. He knew he wanted an icecream but his body said lolly and he didnt know how to correct himself: until he remembered the Ipad.

Throughout the rest of our ghastly school shoe shopping trip Dylan and I used the Ipad to comment on everything from hot drinks, farts and plans for bathtime.

Dylan was relaxed, calm and interactive throughout the trip.

It was thoroughly enjoyable 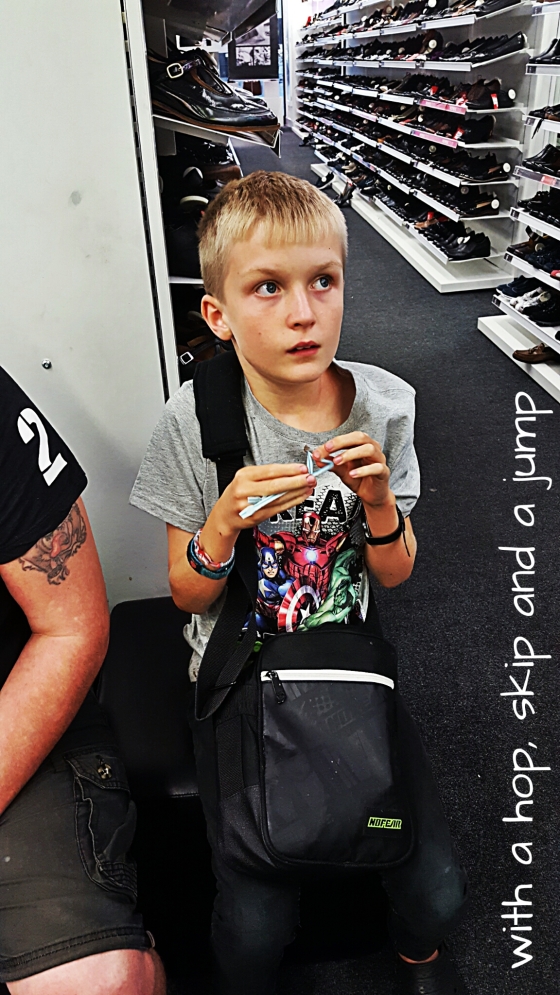